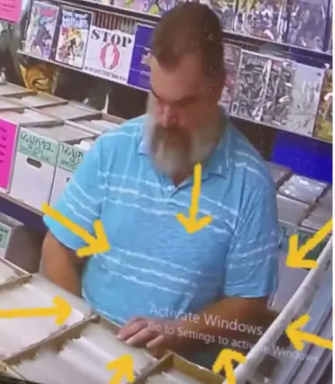 Hollywood actor, Ray Buffer has been accused of stealing comic books worth hundreds of dollars from a San Diego store.

The bookstore shared surveillance footage of the alleged theft.

Southern California Comics accused Buffer, who appeared in the hit television shows “ER,” “Curb Your Enthusiasm,” “CSI: Miami,” “Gilmore Girls,” and “Cold Case,” of allegedly taking more than $600 worth of comics from the store.

The footage posted on Facebook shows a man inside the store who appears to take comics by concealing them under his shirt. 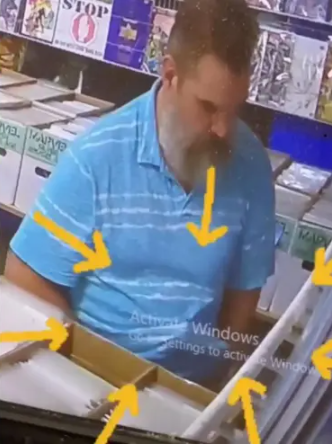 Southern California Comics owner, Jamie Newbold told The Post Sunday that after he put up a photo of an unidentified man on social media to warn other comic book stores about the possible thief, other businesses claimed he was Buffer.

A Los Angeles comic business even sent Newbold footage of another apparent theft that occurred in their establishment showing the same person, he said.

Newbold said the possible crime against his store occurred last Tuesday, October 6, and he filed a police report with San Diego authorities on Thursday.

He said at least six to seven comics were missing, according to New York Post.

Southern California Comics posted on Facebook: “This is Ray Buffer. Our camera captured him stealing comics by concealing them in his shirt. We discovered the crime and watched the surveillance video until we saw this. We are sending all the info over to the police.” 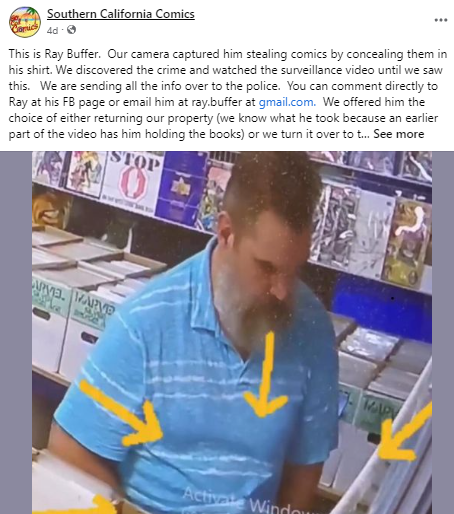 Another incident involving the same man believed to be Buffer occuered in Metropolis Comics in Los Angeles last month.

The video shows the co-owner, Alania Rice, confronting the man who appears to have comics tucked under his shirt, according to footage posted by Southern California Comics.

The owner orders him to leave, and as she turns her back, the man appears to pull comics from under his shirt and places them back on a table before walking toward the exit, footage shows.

No charges against Buffer have been reported.

“We offered him the choice of either returning our property (we know what he took because an earlier part of the video has him holding the books) or we turn it over to the law. He emailed us and claimed we are harassing him,” Southern California Comics said in the Facebook post.

Watch the videos below.