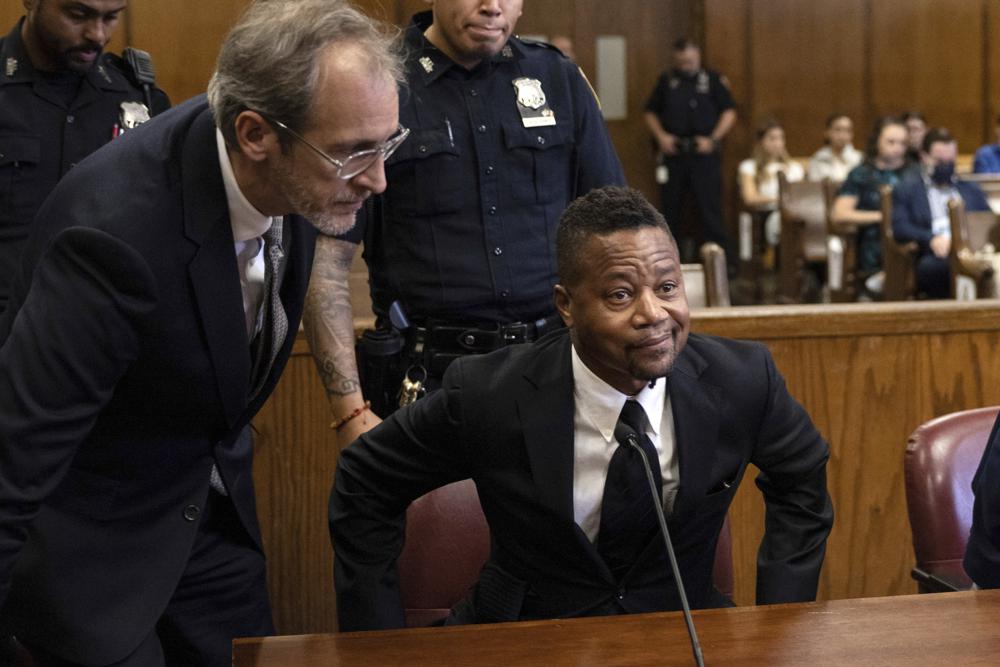 As Cuba Gooding Jr.’s forcible touching case faded to black Thursday with no jail time for the movie star, some of the dozens of women who have accused him of groping, unwanted kissing and other inappropriate behaviour criticized the outcome as a slap on the wrist — and a slap in the face.

The Oscar-winning actor turned #MeToo defendant avoided prison time by complying with the terms of a conditional plea agreement that saw him plead guilty to charges involving just one of what prosecutors have said were allegations from at least 30 women, many at New York City nightspots.

Assistant Manhattan District Attorney Coleen Balbert told a judge Thursday that since the deal was reached in April, Gooding has stayed out of trouble and completed six months of alcohol and behavioural counselling.

That enabled him to withdraw his misdemeanour guilty plea — for forcibly kissing a waitress at a Manhattan nightclub in 2018 — and instead plead guilty to a non-criminal harassment violation.

That means no additional penalties and no criminal record for Gooding, the star of films such as “Jerry Maguire,” “Boyz N the Hood” and “Radio.”

“This plea deal feels like a misstep,” said Kelsey Harbert, a neuroscience student whose allegation that Gooding groped her at a nightclub led to his 2019 arrest but wasn’t part of his guilty plea.

“After three long years of trying to hold Mr. Gooding accountable for touching my breast without my consent, having my day in court taken away from me is more disappointing than words can say,” said Harbert, who was tearful at times as she spoke in court.

Harbert’s lawyer, Gloria Allred, called the plea deal “an insult” to Gooding’s accusers and a “prosecutorial gift to a celebrity who is undeserving of such an outcome.”

Balbert told Judge Curtis Farber that she has received “positive reports for the last six months” from Gooding’s therapist. Gooding started counselling in September 2019 and will continue with treatment beyond the time required by his plea agreement, Balbert said.

If Gooding had failed to comply with the terms of the deal, he would have faced up to one year in jail.

Arrested in 2019, Gooding was among a profusion of Hollywood heavyweights accused of wrongdoing in the #MeToo movement, which exploded five years ago this month.

As Gooding was in court Thursday wrapping up his case, another Oscar-winning actor, Kevin Spacey, was on trial down the block in a civil lawsuit alleging that he sexually assaulted actor Anthony Rapp.

Meanwhile, in Los Angeles, former studio boss Harvey Weinstein and “That 70’s Show” star Danny Masterson are in the midst of separate rape trials. Weinstein was convicted of similar charges in New York in 2020 and is serving a 23-year prison sentence.

Gooding was arrested in June 2019 after Harbert told police he fondled her without her consent at Magic Hour Rooftop Bar & Lounge near Times Square.

A few months later, prosecutors charged Gooding with pinching a server’s buttocks after making a sexually suggestive remark to her at TAO Downtown and the allegation to which he pleaded guilty — forcibly kissing a waitress at LAVO New York in midtown Manhattan, both in 2018.

The LAVO waitress said in a victim impact statement that Gooding was facing “minimal repercussions” while his victims continued to deal with the emotional trauma of his actions.

The TAO Downtown server asked, to no avail, that he be required to complete another six months of therapy to ensure that he changes his behaviour and to send a “special message” to men that sexual assault and misconduct won’t be tolerated.

Asked about the criticism, the Manhattan district attorney’s office referred to Balbert’s remarks in court in April in which she said prosecutors believed the plea deal to be a “fair and equitable disposition” that spared accusers from having to testify at trial and being subject to cross-examination.

Gooding said little in court Thursday, did not apologize to his accusers — as he did in April — and did not answer shouted questions from reporters as he hustled out of the courtroom.

Asked to explain what he did, Gooding told Farber: “I kissed a waitress, your honour.”

The waitress, in her victim impact statement, said Gooding forced his tongue into her mouth unexpectedly while she was serving drinks. In the statement, read into the record by Balbert, the waitress said she was aware of incidents involving Gooding and three other women at the club.

Gooding had previously pleaded not guilty to six misdemeanour counts and denied all allegations of wrongdoing. His lawyers argued that overzealous prosecutors, caught up in the fervour of #MeToo, were trying to turn “commonplace gestures” or misunderstandings into crimes.

Along with the criminal case, Gooding is a defendant in civil lawsuits, including one alleging he raped a woman in New York City in 2013. After a judge issued a default judgment in July because Gooding hadn’t responded to the lawsuit, the actor retained a lawyer and is fighting the allegations.

The Associated Press does not typically identify people who say they are victims of sexual assault unless they grant permission, as Harbert has done.