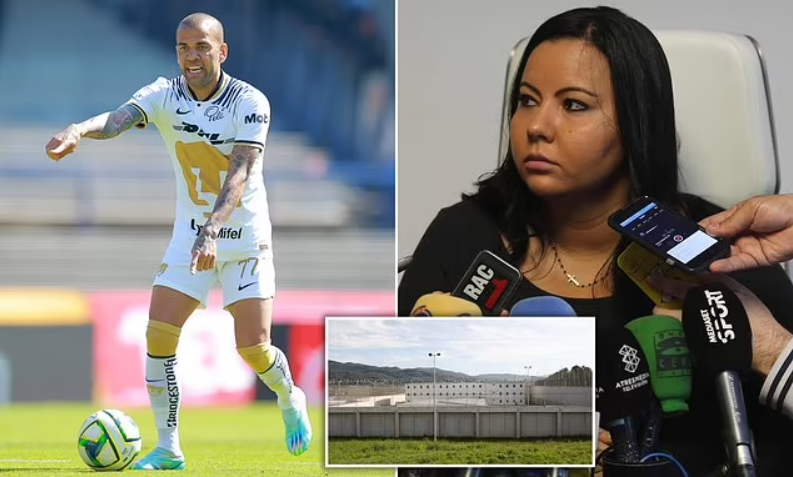 Brazil international Dani Alves’ ex-wife has spoken out after his arrest and incarceration over nightclub bathroom sex attack.

The former Barcelona star has spent the last three nights sleeping at Brians 1 jail near Barcelona after being held over an alleged sexual assault at the city’s Sutton nightclub last month.

An alleged victim reportedly accused him of slapping her and raping her in a nightclub toilet.

Court officials who have confirmed the footballer is under investigation for alleged sexual assault have not specified the exact nature of the allegations.

Dana Dinorah, ex-wife of Alves, said: ‘I’m still in shock. It seems like it’s a nightmare and it’s not happening.’ 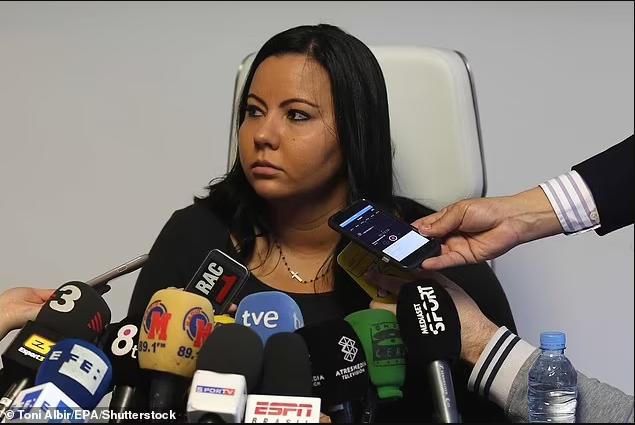 Insisting she believed the father of their two children was innocent, the Brazilian-based businesswoman said in an interview with a Spanish TV programme: ‘Dani would never ever ever do this.

‘I say this because I’ve known him for 22 years and was married to him for ten.

‘This has been a shock for me and for my children.

‘I have two teenage children who are suffering.’

Speaking to the programme Fiesta on Spain’s Telecinco station, Dana added: ‘Dani asked his lawyer to call me so I could sort out his most urgent things.

‘I found out he was in prison because of that phone call he asked his lawyer to make to me.

‘I’ve not had access to Dani and haven’t been able to speak to him on the phone. His lawyer says he’s sad but he’s okay. She’s the only one who has been able to see him.

‘I’m here for whatever I can do to help him.’

Dana spoke after the footballer’s current wife, Spanish model Joana Sanz, said she had lost the ‘two pillars of my life’ following her husband’s incarceration and her mother’s death.

Joana, who married Alves in Formentera off Ibiza in 2017, wrote: ‘I ask media who are outside my house to please respect my privacy at this moment.

‘My mother died a week ago and I have barely begun to take on board that she is no longer with me for me to be tormented with the situation of my husband.

‘I have lost the only two pillars in my life.’

The former Barcelona defender, who has been sacked by Mexican club UNAM Pumas after it emerged he had been remanded in custody by a judge over the sexual assault allegations, was arrested after flying to Spain last week following the death of his mother-in-law.

It was initially claimed Alves had been accused of putting his hands down a woman’s underwear in a nightclub toilet before the rape allegation emerged.

Spanish media reported overnight the footballer had asked his defence lawyer for permission to be questioned again under oath by the judge who sent him to prison pending an ongoing probe so he could clarify reported inconsistencies in statements he has made inside and outside court about the allegations before and after his arrest.

He told a TV programme before his arrest he had never met his female accuser although he admitted to being at the nightclub where the alleged incident occurred.

Spanish media reports over the weekend that he told a judge he had ‘consensual sex’ with the woman after being told witnesses and CCTV footage contradicted his TV claims he had not met his alleged victim.

Alves is expected to remain at Brians 1 for at least the next few weeks until his lawyer can persuade judges he is not a flight risk and should be released after lodging bail.