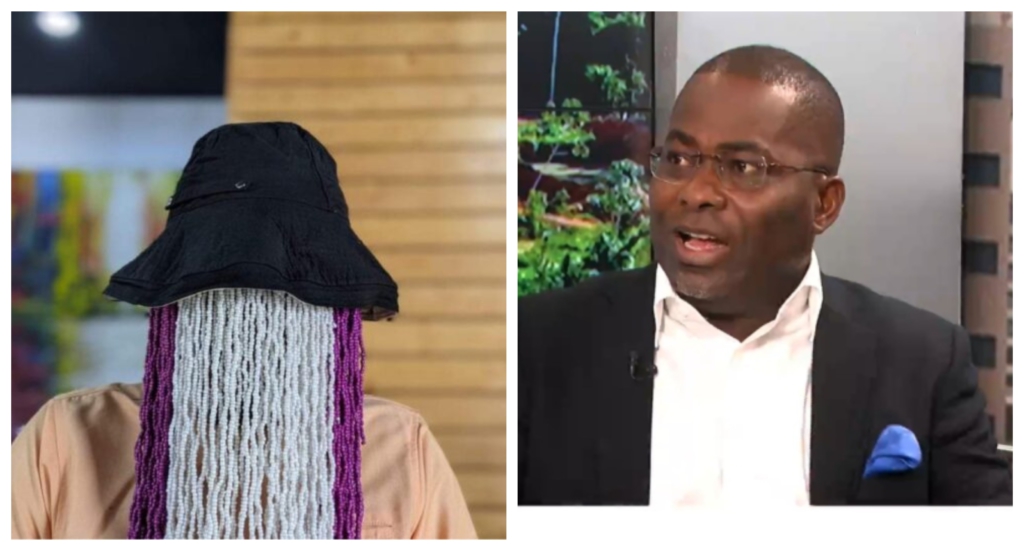 A former secretary to the Inter-Ministerial Committee on illegal mining, Mr. Charles Bissue has been in the news lately for his alleged involvement in illegal mining activities.

This week, the National Communication Officer of the National Democratic Congress (NDC), Mr. Sammy Gyamfi called for his prosecution by President Akufo-Addo, together with other persons associated with government, and are alleged to be complicit as well.

In reaction, Mr. Bissue said he has had enough of the name calling, especially by persons in the opposition National Democratic Congress.

It would be recalled that Mr. Bissue stepped aside in 2019 as secretary to the Inter-Ministerial Committee on Mining following the airing of an investigative documentary by Investigative journalist Anas Aremeyaw Anas and the Tiger eye P.I team.

The government appointee has denied the claims insisting that the Ghana Police Service exonerated him from any wrong doing. But Tiger Eye P.I insists that he is complicit.

Below are press statements issued by both parties on the matter:

2. Tiger Eye’s position, conduct and approach to all investigations are based on truth, facts and audio-visual evidence. Tiger Eye affirms and maintains its investigations and conclusions in the Galamsey Fraud documentary about Mr. Charles Bissue and other staff at the dissolved IMCIM. Any claims or allegations to the contrary are false and without merit. Mr. Charles Bissue engaged in bribery and corruption and Tiger Eye uncovered this in the form of audio-visual evidence when undercover journalists posed as owners of an abandoned mining company.

3. Allegations by Mr. Bissue that agents of Tiger Eye P.I solicited monies from him to drop the investigative piece is merely an afterthought and a figment of his imagination. It is part of the recent mantra by persons caught in undercover investigations to say it was published to disgrace them after they failed to pay monies. The old mantra was ‘entrapment’. None of these persons filmed engaged in bribery and corruption has ever been able to prove such allegations nor won any Court case confirming such fake claims.
It defies logic and exposes the incoherence in Mr Charles Bissue’s narrative, that, Tiger Eye would demand bribes to drop a story it had advertised long before.

4.Tiger Eye set out to expose heavyweights who dabbled in the illicit galamsey trade on the back of our firm conviction that nobody should be allowed to profit from the devastations of our environment and to augment the President, Nana Akuffo-Addo’s commitment to fighting the menace.

5. When Tiger Eye received a tip-off from persons who had witnessed the first-hand sabotage from officials who were kept in charge of redeeming our environment from pillage by greedy individuals and established prima facie, we set out to investigate the claims through a sting operation, popularly known as the “Anas principle”.

7. Subsequently, Tiger Eye petitioned the Office of the Special Prosecutor with all tapes and recordings as irrefutable proofs of official complicity in the galamsey menace with Charles Bissue as the arrowhead of same. The OSP announced an investigation into the complaint, and since called witnesses, amongst other processes.

8. While investigations were ongoing under the OSP, we noticed a parallel investigation (an unwelcomed intrusion) was opened by the Tiwaah Addo Danquah-led CID on the back of a so-called complaint from the Chairman of the IMCIM, Prof. Frimpong Boateng, which generated enormous public opprobrium.

9. Tiger Eye, sensing a fishy move had been designed to undermine the investigations of the OSP, took a decision not to collaborate with the CID since the same would have amounted to duplication of effort and a waste of precious resources, especially so when we suspected the whole CID intrusion was a smokescreen. Therefore, the so-called CID report which Mr. Bissue always hurriedly likes to bask in had no inputs from Tiger Eye who were the sole authors of the Galamsey Fraud investigations, and so, Tiger Eye
considers the said report as a white-washing antic with no credibility.

10. Mr. Charles Bissue claims persons within NPP recorded the videos which expose his bribe-taking moves and sold them to Tiger Eye, and that, those monies were donated by the Ashanti Regional Chairman of the NPP popularly known as Wontumi for a party activity. That’s completely false. For the records, no agent of Tiger Eye works with or for the NPP, and, Tiger Eye has a time-tested procedure for employing its agents, who are usually highly trained and skilled in investigating the underworld. The conversations that ensued before Mr. Bissue took the bribes in our investigative piece are a matter of public record. Those conversations had nothing to do with any party activity which Mr Bissue is
struggling very hard, albeit unsuccessfully, to interpolate into the whole narrative. Tiger Eye agents do not deliver party donations!

11. Tiger Eye is not privy to any clearance of Mr. Bissue by either the former Special Prosecutor or the current Special Prosecutor. It is interesting how Mr. Bissue, a suspect of OSP is bravingly claiming OSP has cleared him without the knowledge of the Complainant in the case i.e., Tiger Eye. Since the OSP is still seized with the matter, Tiger Eye is restraining itself from jeopardising the investigations and wouldn’t want to put out too many details. We still patiently await pronouncements from the OSP, especially in the wake of the renewed galamsey struggle.

12. Our agent, from whom Mr Charles Bissue took the bribes to facilitate the illegal mining activities, is available and will always avail himself to bear testimony at any forum properly constituted for that purpose. The names being bandied about by Mr. Charles Bissue are a figment of his imagination.

While I will not usually respond to propaganda, it will be a disservice to the discerning Ghanaian if
I allow Tiger Eye P.I to get away with his baseless press release. First, I issued a statement
underpinned by facts, against the claims made by the opposition National Democratic Congress
(NDC) about the government’s effort in the galamsey fight.

Albeit not referenced to Tiger Eye P.I, and typical of the nature of his corrupted journalism, they fatuously jumped in with their usual baseless propaganda to serve their paymasters. Although this advice will fall on deafened ears because that is the path they’ve chosen to travel, they should do better.

Now respectfully, let me lay down the facts and I believe Tiger Eye P.I can learn from it.

6. It was in this context, I suggested the application be fast-tracked such that the data from the mapping exercise could be merged with every entry on our system. I did not circumvent any process, and there is evidence to that.

12. I stepped out of office as Secretary of the IMCIM just after the documentary was aired to allow a proper and uncompromised investigation to be undertaken. This has act goes to prove I had nothing to hide.
13. In July 2019, the Police after a thorough investigation into the allegations, exonerated me. Report on their investigation is a public knowledge.
14. It is rather ironic that Tiger Eye P.I who in its years of so-called undercover investigations, recognized and subjected its findings to the Police, now finds the institution as lacking the credibility to handle similar cases today.
15. In any event, following a petition to the OSP in 2019, I have availed myself for interrogations, and been very cooperative in unravelling this truth in this case. Mr Martin Amidu [then Special Prosecutor] hinted in his corruption risk assessment of the Agyapa Deal, of the extent to which he had carried his investigation by indicating there was a “matter of identity” yet to be uncovered. I believe Mr. Martin Amidu provided his report on the subject matter in his handing over notes to the new Special Prosecutor.
16. Tiger Eye P.I cannot capitalize on this moment to dissuade Ghanaians from interrogating this matter. Where lies his credibility in the fight against galamsey when he had turned a blind eye to the unprecedented devastation caused by galamseyers to our lands and water bodies?
His silence is nothing short of a traitor and a nation wrecker whose interest was to conjure propaganda to take me out for fighting the miscreants in our mining sector.
17. I dare Anas Aremeyaw Anas, and his entire Tiger Eye P.I to publish the Part 2 of that documentary. Why has he shelved that part? Or he’s been paid off to conceal that? Mr Aremeyaw Anas is a wimp, and cannot be trusted.
18. Until I mentioned the name of the IMCIM Chairman, Prof Kwabena Frimpong-Boateng in my recent release, Anas Aremeyaw Anas had remained mute over the defense I put against his claims. Why so? I’m sure he’s alarmed and fears for what will ensue later on.

19. It is no doubt that Anas Aremeyaw Anas has been cowed into silence by his own nemesis, and the persistence at which I expose the untruth about his work. Ghanaians are very discerning and have come to realize the spin he puts on his recordings to defame people.

They will put to strict scrutiny every piece of publication he does going forward.

Vindication is in the womb of time!