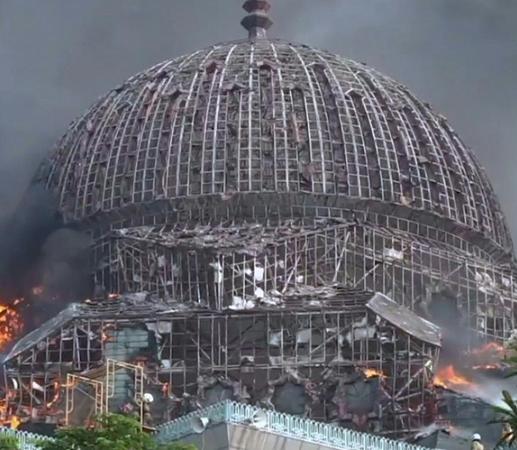 The Jakarta Islamic Center mosque in Indonesia was destroyed by a fire during its renovation on Wednesday, October 19.

Videos shared online show the moment the mosque’s dome collapsed due to the fire.

Video footage showed flames and smoke billowing from the mosque’s dome just before it collapsed.

Firefighters were alerted about the blaze shortly after 3pm local time, with at least ten fire engines being dispatched to the scene, Indonesia media reported.

The cause of the fire is not yet known.

Media reports suggest that the Islamic Center was undergoing renovations at the time.

No one was injured in the fire or the ensuing collapse. Local media added that police are investigating the cause of the fire and have questioned contractors working in the building.

Watch the video below.

#Indonesia:
Dome of the Grand Mosque of Islamic Center called “House of Allah” collapse because of fire in #Jakarta …! #JakartaIslamicCenter pic.twitter.com/RBhmDf7xPI

A circulating video of a fire that broke out in the Grand Mosque of the Islamic Center in the Indonesian capital, #Jakarta, which led to the collapse of its dome.#Indonesia pic.twitter.com/2Z30nmcbuj