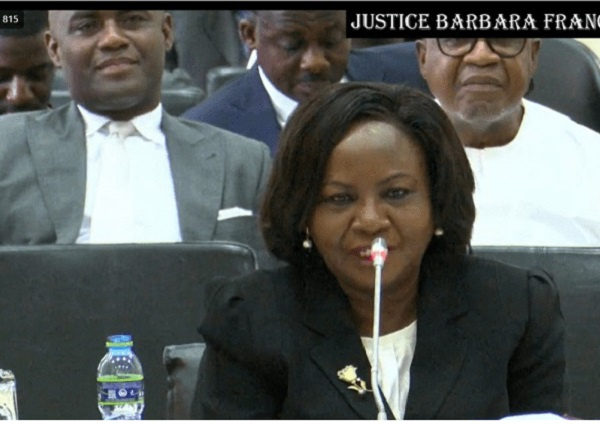 Supreme Court judge nominee, Justice Barbara Frances Ackah-Yensu, has admitted that there is a considerable loss of trust in the Judiciary.

She, however, insisted that it cannot be true that the entire country does not trust the courts.

Questions about the impartiality and confidence of the public in the Judiciary dominated her vetting by Parliament’s Appointment Committee on Tuesday, October 18.

According to Justice Barbara Ackah-Yensu who is currently a Justice of the Court of Appeal, the number of cases that are being filed in court gives an indication that people still have some trust in the court’s ability to deliver true justice.

“I am aware of some loss in trust and confidence but from where I am sitting as a judicial officer, I can confidently say that it is not true, with all due respect, that generally, the populace is losing trust,” she said on Tuesday.

In a related development, Minority Leader Haruna Iddrisu claimed in his remarks during the committee’s hearing that President Akufo-Addo is packing the Supreme Court.

But Justice Barbara Ackah-Yensu disagreed with that assertion.

According to her, the new nominees are all persons who will replace retiring justices of the Supreme Court.

She added that the workload warrants the number of judges on the court.

“With all due respect, I think that’s a misconception. It is not a fact that we’re going to be 18 members of the Supreme Court. As a matter of practice, generally speaking, nomination to the Supreme Court is when there are vacancies and when some of the justices are going on retirement. I don’t agree that the Supreme Court is being packed,” Justice Ackah-Yensu said.

According to her, the survey lumps both judges and other judicial staff together in an unscientific manner.

“It is a fact that there is an amount of corruption, but I do not think that the Afrobaromenter statistics is correct because when they talk about the Judiciary they bunch judges together with judicial staff, investigators, and prosecutors as Judiciary. So maybe, we may need a more scientific way of determining this,” she noted.

The famous mystery meeting of President Rawlings and then President-Elect Akufo-Addo on Tuesday, 27TH December 2016

Iranian schoolgirl, 16, is 'beaten to death for refusing to sing pro-regime anthem'