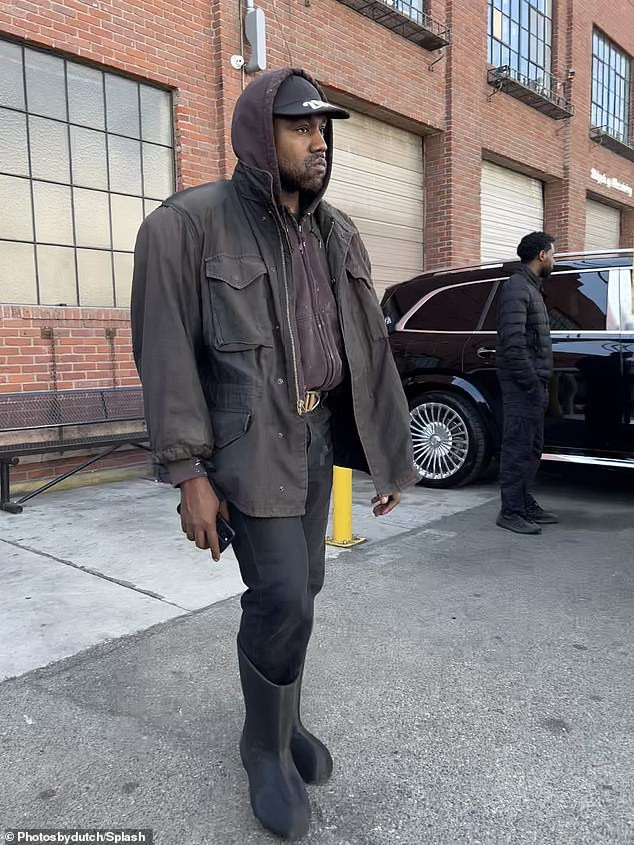 Kanye West has claimed he is being disrespected by the media as he makes another attempt to justify his anti-Semitic comments.

West, 45, launched the new bizarre outbursts as he left a studio in New York with his new girlfriend, Juliana Nalú. 24.

He went on to rant about the Jewish media, claiming that he has been ‘blackballed’ because he refuses to allow his voice to be ‘bought’.

The father-of-four said that he is being disrespected by being called a rapper, because he is the ‘richest black man of all time, worth $11billion.’

West has faced criticism in recent weeks for his bizarre behavior, including rocking branded shirts with ‘White Lives Matter’ on it at Paris Fashion week.

He has today again defended the movement, saying it is ‘like taking a cold shower which really wakes you up’.

In the same rant, he went on to say: ‘I love rappers. Rappers are artists.

‘But when media calls me a rapper specifically to not bring up the fact that I’m worth $11 billion, that I’m the richest black man of all time, that I’m a billionaire and I’m a tycoon, that I’m a visionary.

‘And if I say that, if I say those three things, then they’ll say I’m a narcissist, right? But they push you down so much that you got to fight just to say who you are.’

During an episode of Drink Champs podcast with N.O.R.E, West claimed that George Floyd died from taking fentanyl and that Derek Chauvin’s knee ‘wasn’t even on his neck like that.’

Floyd’s family have since lodged a $250million lawsuit against the star over the comments, calling them ‘repugnant’ and saying he used ‘false statements’ to ‘promote his brands’.

Drink Champs have been forced to delete the entire episode after a fierce backlash, with host N.O.R.E apologizing for his guest’s comments.

When asked about N.O.R.E’s apology, West said: ‘He’s under a lot of pressure, if you look at the first thing he says, N.O.R.E. does an interview with Rosenberg.

‘He is a good guy. Like he said, he called me this morning. He said, “Maybe politics is a little bit too much for me.” Everybody back up off of N.O.R.E.

‘What’s the exact thing I was saying? I said the Jewish media controls so many things.

‘It’s not all the Jewish people, but there’s specifically Jewish people in media that are in power that try to, they bought the black voice, but they haven’t been able to buy my voice.

LeBron James’ hit HBO show The Shop decided that they would also scrap West’s interview, because he used it to ‘reiterate more hate speech and extremely dangerous stereotype’.

Lawyers say that West used ‘malicious falsehoods’ about Floyd to profit from his death and the families trauma.

During the podcast he also implied that Kris Jenner, 66, had sex with Drake, 33, and say ‘Jewish media’ censored an interview of his.

JP Morgan Chase last week ended its relationship with West, giving him until November 21 to remove his funds from their bank.