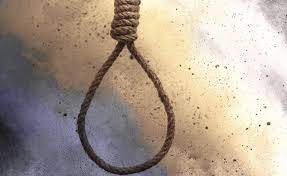 A 25-year-old man, Bulus Asuma, has committed suicide in Jos, Plateau State, over the loss of two tricycles belonging to his employers to thieves.

Asuma of Angwan Rukuba in Jos North Local Government Area hung himself in his room when he returned home the day the second tricycle was dispossessed from him by a gun-wielding man.

Family sources say the deceased had collected a tricycle from a woman earlier in the year on hire purchase. The tricycle was stolen from him and was locked up for a week by the lady who he purchased the tricycle from. The deceased paid for a few weeks and could not continue as he ran out of cash. He approached another person for another tricycle this time to work and make remittances on a daily basis to be able to raise funds to pay back his former employer. Sadly on October 13, while returning home from work, he was attacked by an armed man who dispossessed him of the tricycle.

His family members claim he returned home and threatened to kill himself but they did not take him seriously. However he showed how serious he hung himself with a rope inside his room.

The spokesperson of the Plateau State Police Command, DSP Alabo Alfred, who confirmed the incident said the police were investigating the incident.