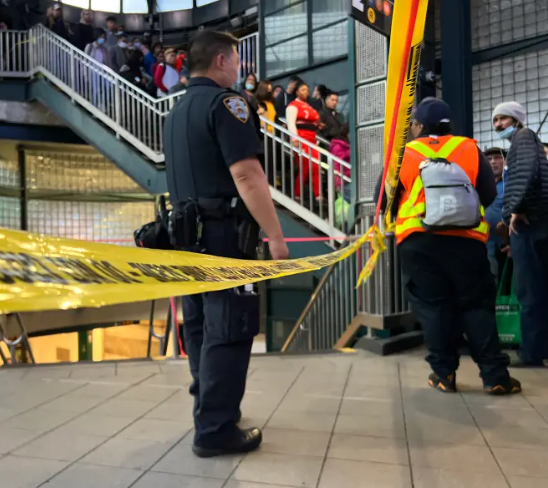 A 48-year-old man was pushed in front of an oncoming subway train and killed during Monday night’s rush hour after he accidentally bumped into another rider, cops and police sources said.

The incident occurred on October 17 in Queens, New York.

The suspect’s cell phone dropped onto the tracks when the victim bumped into him at the Jackson Heights-Roosevelt Avenue 74th Street station just before 4:45 p.m., according to cops and the sources.

The 50-year-old man who was bumped into then yelled at the other man to retrieve his phone from the tracks, sources said.

The man who bumped into him refused and the pair got into a scuffle.

The man who lost his phone then pushed the victim, identified as Heriberto Quintana, down to the tracks, in front of an oncoming Jamaica-bound F train, according to sources and police.

“I heard a loud argument, an altercation. It was two Spanish guys — older, like in their 50s,” an MTA station cleaner at the Jackson Heights station said.

“You could hear them yelling on the mezzanine level. Then I heard screams and ran down to the platform.”

He said the men were shouting and cursing in Spanish.

The MTA worker, who asked not to be identified, said the victim was alive in the immediate aftermath.

“He was alive when I saw him, breathing and everything.”

Quintana was rushed to Elmhurst Hospital, where he was pronounced dead.

Fellow subway riders who witnessed the horrific incident tried to hold down the suspect, but he escaped and fled on another train, according to the MTA worker.

Police were able to apprehend the suspect and take him into custody. He had not been charged with any crimes as of Monday night.

Watch a video from the scene below.

A man was struck and killed by an oncoming subway train in Queens on Monday afternoon during an apparent dispute, police sources said. Full story: https://t.co/pSHrlb1p08 pic.twitter.com/6ZqbWmN3H2

Nigeria’s anti-drug agency apologises to man for raiding his home, arresting him as a suspected drug dealer