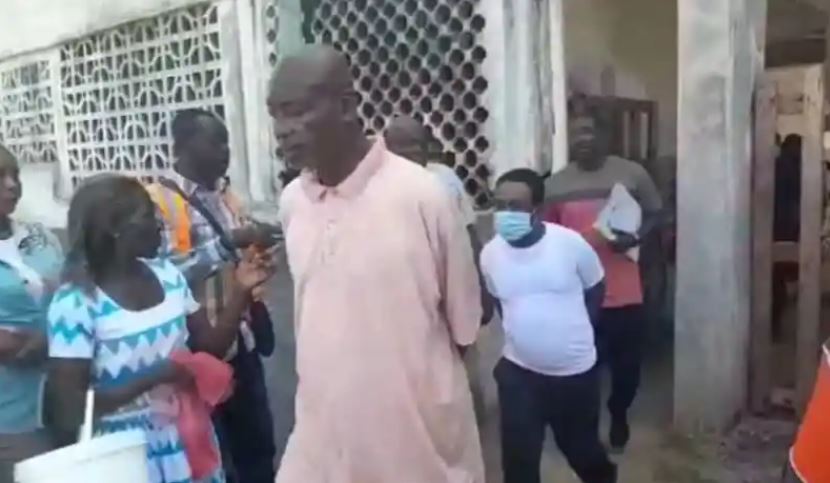 Relatives of Jonathan Obeng, the third accused person in the case of the slain prospective nursing student at Mankessim on Tuesday fled for their lives during a confusion between them and the family of the deceased.

A heated verbal exchange ensued between the two families outside of the Cape Coast Court Complex after the court had adjourned the case to November 8, 2022.

The family of Obeng, the mason who allegedly dug the grave to bury the deceased, was incensed by a journalist videoing them as they cried over the continuous detention of their relative and accosted him (the journalist) in the process.

Kate Swanzy, an auntie of the late Georgina Asor Botchwey, flared up upon hearing of the incident, which sparked a verbal exchange.

This culminated in a brawl and with support from sympathisers gathered to witness the case, the bereaved family  outnumbered members of Obeng’s family, who, upon sensing danger, quickly took to their heels.

The Cape Coast District Court two, presided over by Mrs Bernice Mensimah Ackon, for the third time remanded the accused after the prosecutor, DSP Daniel Gadzo, prayed for ample time to complete investigations.

The pleas of the accused were not taken and the case has been adjourned to Tuesday, November 8.

They have been charged with conspiracy to commit murder and murder.

The accused persons were, however, booed at and cursed by the scores of spectators as the police marched them into a waiting vehicle.

During their last appearance in court,  Quansah appealed to the court to release Obeng because he was not part of the conspiracy.

He admitted to engaging his 26-year-old in-law to dig the grave, but said he knew nothing about the killing.

Quansah was, however, stopped by the presiding judge because trial had not started yet.

The prosecutor, DSP Daniel Gadzo, presented an amended charge sheet to the court, which earlier had Clarke and Darko as the only accused persons on Thursday, September 22.

DSP Gadzo said the complainant was Mr Duodu, a military officer and brother of the deceased.

He said Darko, a boyfriend to the sister of the deceased, was a resident of Kumasi, while Clarke resided at Sikafo Ambantem at Mankessim.

He said on Thursday, September 8, 2022, the deceased, who had come from Yeji in the Bono East Region for an interview at the Ankaful Psychiatric Nursing Training School in Cape Coast, as a student applicant, called Darko to inform him of her presence in town.

He said Darko promised to pick her up after the interview on Friday, September 9, 2022.

As promised, the two accused persons picked Georgina from Ankaful in a taxi to Pedu in Cape Coast where Clarke continued the journey with his Benz car with registration number GT 8686 – C  to Akwakrom, a suburb of Mankessim.

Clarke and Darko took the iPhone of the deceased, locked her in a room and left for Sikafoambantem, a suburb of Mankessim, where they engaged Obeng to dig a grave in an uncompleted storey building belonging to Clarke.

At 0200 hours, Clark and Darko took the lady to the uncompleted building where Clarke hit her neck with a club from behind and Darko strangled her till she died.

They then cut her hair and buried her in the hole.

He said on the same day, the police in the Central Region picked intelligence which led them to arrest Darko at Anomabo but Clarke managed to escape.

Upon interrogation, Darko admitted to the crime and said they wanted to use the deceased for money rituals.

On Wednesday September 21, 2022 Quansah was also picked up from his hideout.

Meanwhile, speaking to Duodu, the  brother of the deceased, after the court hearing, he said the family was satisfied at the pace of proceedings and was hopeful of getting justice.