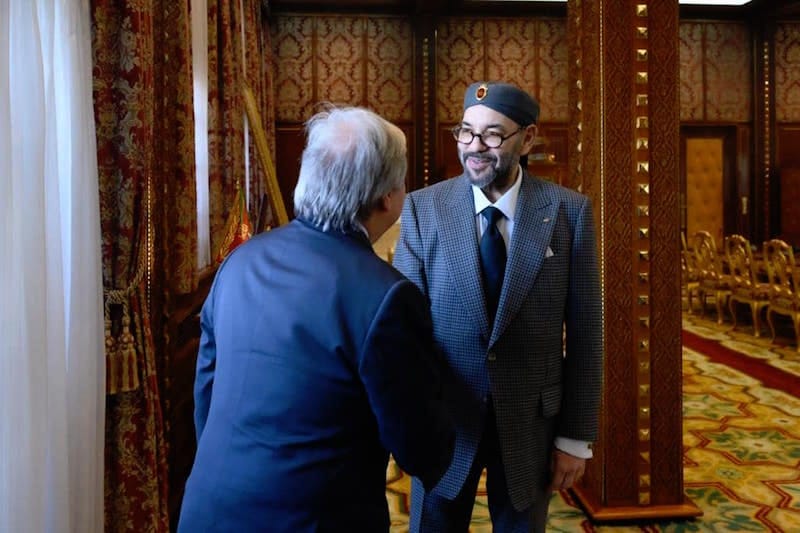 The UN Secretary General António Guterres has recognised the leadership of Morocco’s King Mohammed VI in promoting the values of tolerance and respect for different cultures, religions and civilisations.

King Mohammed VI on Wednesday, November 23, received Mr Guterres who expressed his gratitude to the King for the success of the 9th Forum of the Alliance of Civilizations, held in Fez.

He welcomed the adoption of a strong and binding Declaration, more necessary than ever in a troubled international context.

Mr Guterres was keen to be present in Fez because he is convinced that the values of tolerance, mutual understanding and dialogue should be recognised and promoted at a time when confrontation, crises and conflict dominate the international scene.

The UN Chief’s presence in Fez is also explained by his recognition of the leadership of the King in promoting the values of tolerance and respect for different cultures, religions and civilisations.

The meeting is in line with the distinctive and recognised leadership developed by Morocco, within the concert of nations, notably on important global issues, such as migration (Marrakech Pact, in 2018), terrorism (co-presidency of the Global Forum against Terrorism), climate change (Cop.22), green energies and the promotion of the values of tolerance and co-existence.

On the strength of this virtuous dynamic, Morocco is constructively and actively accompanying the action of the United Nations in several conflicts (Libya, the Middle East, the Central African Republic, Sahel).

It is within this framework that the UN Secretary General was keen to praise the Kingdom’s constructive and constant contribution to the maintenance and consolidation of peace, the strengthening of stability and the promotion of development, particularly in the African continent.

On the issue of the Moroccan Sahara, Mr Guterres has always adopted a benevolent attitude, especially during Operation Guergarate, and through his balanced reports to the Security Council.

King Mohammed VI has always expressed the Kingdom’s support for Mr Guterres’ efforts to find a lasting solution to this artificial regional dispute, on the basis of the autonomy initiative, within the framework of the Kingdom’s sovereignty and territorial integrity.

Morocco also expresses its cooperation with the Personal Envoy of the Secretary General, Mr Stafan De Mistura, for the political process, and with Minurso for the observation of the cease-fire.

Mr Guterres’ visit to Morocco comes against the backdrop of a strong momentum of support for the Moroccan autonomy initiative.

On the other hand, Algeria and the Polisario armed group continue to defy the United Nations, by their prohibition of water and fuel supplies to the Minurso observation posts, by their violation of the ceasefire, and by their refusal to get involved in the political process through the round tables.

UBA Ghana is best Remittance Bank of the Year