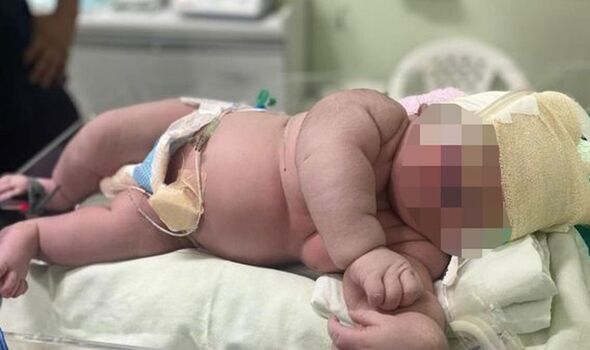 A woman has given birth to a giant baby weighing 16lb and measuring 2ft tall in Brazil.

Angerson Santos was welcomed into the world via C-section at Hospital Padre Colombo in Parintins, Amazonas State, on Wednesday, January 18.

Medics believe that the supersize baby is the biggest to have ever been born in the state, beating the previous record of 13lb and 1.8ft.

Cleidiane Santos dos Santos had visited the hospital for a routine obstetric consultation, reports the Mirror.

But doctors quickly realised that the unborn baby would be too big for her to carry to full term so kept her in for a C-section.

Surgeons carried out the C-section the next day and Angerson was born weighing 7.328 kilogrammes and measuring 59 centimetres.

The baby is in an incubator but is in stable condition and has no abnormalities, according to medics at the hospital.

Angerson is so large that none of the newborn clothes his parents had purchased prior to his arrival fit so a fundraiser has been launched to help the family buy new clothes.

The facility is taking donations of extra-large nappies and clothes for babies aged between nine months and a year.