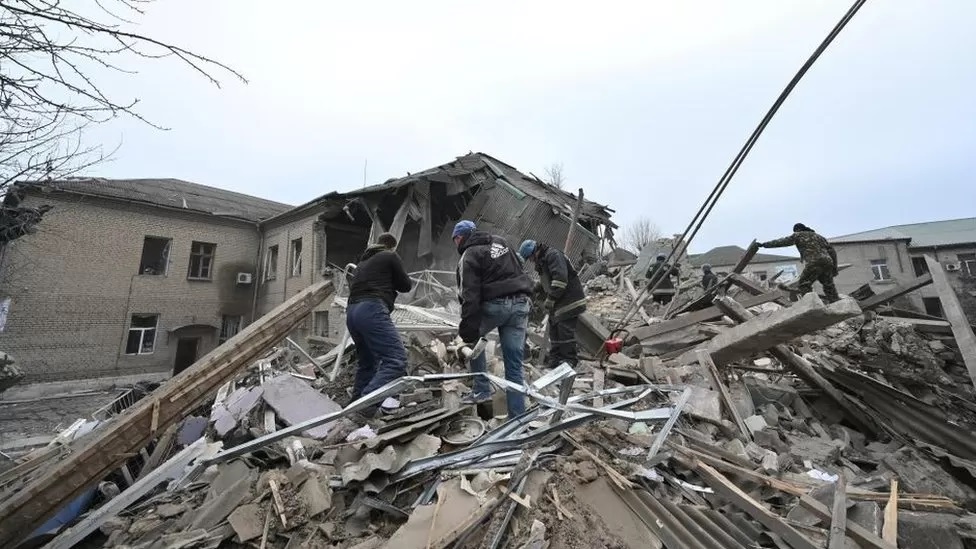 A newborn baby has been killed in a Russian missile strike on a maternity unit in Ukraine’s southern Zaporizhzhia region, emergency services say.

The baby’s mother, who was the only woman in the facility at the time, and a doctor were rescued from the rubble.

The Zaporizhzhia region, where a key nuclear plant is located, has been the focus of repeated Russian attacks.

Ukrainian emergency services said the Russian missiles struck the maternity ward of a hospital in the Ukraine-held town of Vilnyansk, close to the frontline, overnight.

Although the area is held by Ukraine, the whole Zaporizhzhia region is claimed by Russia after self-styled referendums in September.

Elsewhere on Wednesday, Ukrainian officials said two people were killed in shelling on a residential building in Kupiansk – a town in the Kharkiv region which was retaken by Ukrainian forces in September.

Speaking after both attacks, President Zelensky accused Russia of trying “to achieve with terror and murder what it wasn’t able to achieve for nine months” on the battlefield.

Several medical facilities have come under Russian attack during the nine-month war, including a strike on a maternity hospital in Mariupol in March which left three dead, including a child.

Russia at the time said the attack had been staged.

The World Health Organization has documented 703 attacks on health infrastructure since Russia’s invasion began on 24 February – it defines an attack as involving violence as well as threatened violence against hospitals, ambulances and medical supplies.

The UK Ministry of Defence said on Wednesday that Russian commanders were likely using Iranian-made unmanned aerial vehicles (UAV) to “prioritise medical facilities as targets of opportunity and strike them with guided munitions if identified”.

Parts of the wider Zaporizhzhia region are occupied by Russia, including the nuclear plant, which was overrun by Russian forces weeks after the invasion began.

Russia annexed Zaporizhzhia and other Ukrainian territory in September but has been pushed back on the battlefield in the south, notably in Kherson region. The two armies face each other across the River Dnipro.