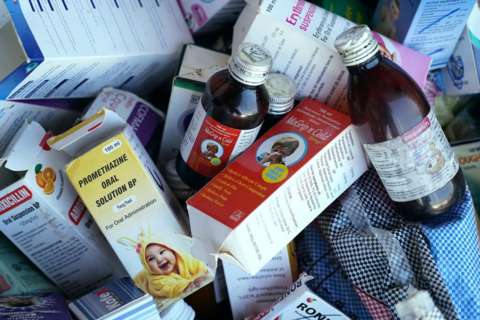 The Gambia has already started withdrawing the children medicines from circulation

Nigeria has warned its citizens to be wary of the cough syrups linked to dozens of deaths of children in The Gambia.

The four syrups manufactured by an Indian pharmaceutical company – are suspected to have been contaminated. The World Health Organization had issued a global alert over the paediatric medicines.

In a statement, the agency says anyone who has used the “substandard products” or has suffered any adverse reaction, should seek immediate medical advice and report to the health authorities.

It says effects of the toxic substances allegedly contained in the cough syrups include abdominal pain, vomiting, diarrhoea, inability to pass urine, headache and acute kidney injury which may lead to death.

But it has not said whether the syrups have been discovered to be in circulation in the country.

The products – Promethazine Oral Solution, Kofexmalin Baby Cough Syrup, Makoff Baby Cough Syrup and Magrip N Cold Syrup – were manufactured by an Indian company, Maiden Pharmaceuticals, which had failed to provide guarantees about their safety, the WHO said.

The Gambia has already started withdrawing the medicines from circulation. At least 69 deaths of children have been linked to the cough syrups in the West African country where investigations are under way.

The WHO had expressed fears that the Gambia might not be the only country where the cough syrups had been exported to.