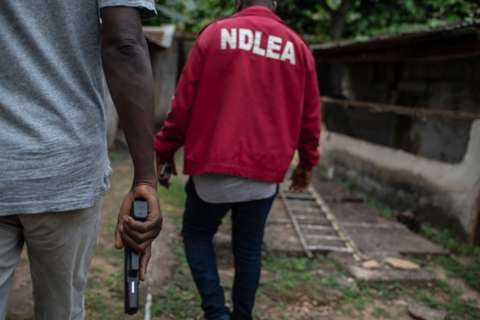 The Nigerian anti-drug agency has apologised to a man in the central state of Plateau after its operatives raided his home by mistake as they targeted a suspected drug dealer.

Armed operatives of the National Drug Law Enforcement Agency (NDLEA) arrested Alyasa’u Idris after breaking into his home in a predawn raid on Thursday.

But it turned out to be a wrong target.

Mr Idris, 42, said he initially thought his house was being attacked by kidnappers because kidnappings for ransom are rampant in the country. He then hid inside the ceiling but was pulled out by the officers who broke into the ceiling, he said.

The incident happened in the town of Yelwan-Shendam.

The officers interrogated the man after taking him away – but they then realised he was not the person they were looking for.

Mr Idris, a mattress seller, told the BBC that his entire family was traumatised by the experience and that all his four wives were taken to hospital because of the psychological impact.

A spokesperson for the anti-drug agency Femi Babafemi told the BBC that its officers had immediately apologised to the man after realising it was a case of mistaken identity.

Mr Babafemi said the victim should write a formal complaint to the agency for investigation on the claims of missing money and demand for compensation.