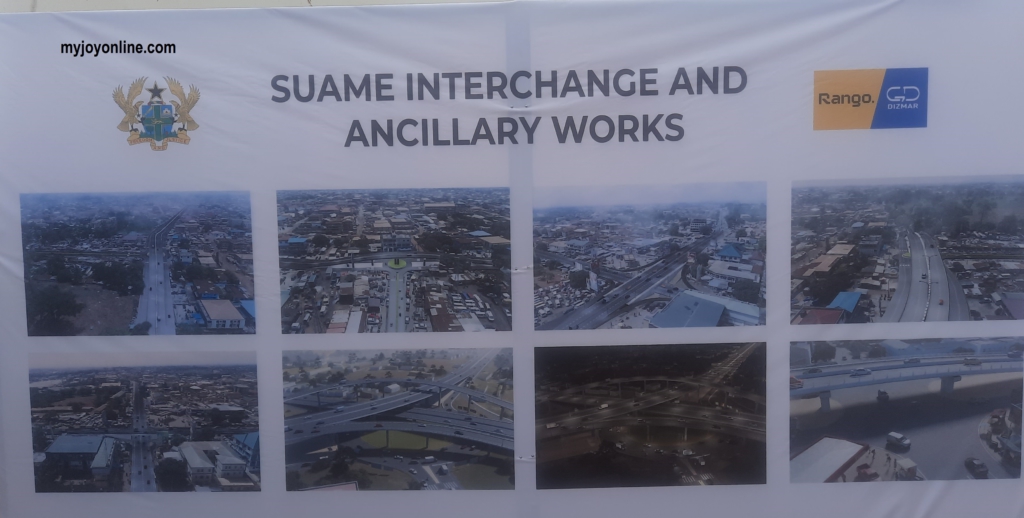 President Akufo-Addo has cut the sod for construction works to begin on the much anticipated Suame Interchange project in Kumasi.

The 4-tier interchange project, to be constructed in two phases within 30-months, will include five overpasses at Krofrom, Abrepo, Anomanye and Magazine New Road as well as Abusuakruwa Junctions.

It will also result in the widening of sections of the Kumasi ring road and the Offinso road into 3-lane dual carriage way whilst additional 15 kilometer stretch of local roads would be developed.

The project has suffered several setbacks after it appeared in the national budget thrice.

Nonetheless, residents of Kumasi especially, those in Suame can now heave a sigh of relief as President Akufo-Addo, has been joined by the Roads and Highways Minister, Akwasi Amoako Atta, Minister of Parliamentary Affairs and Majority Leader who doubles as Member of Parliament for Suame, ministers of state and traditional leaders to break ground for the project.

The Municipal Chief Executive for the area, Maxwell Ofosu Boakye tells JoyNews that the project has come as a relief to him and the people he represents.

“The wait is over; the much anticipated interchange is here and I am elated as MCE. I am very, very happy,” he said.

“The entire region has been anticipating and waiting for this project for about 3-years now.

It featured in our budget for three consecutive times and the good thing is that this project has a period of 30-months to complete, and it’s a project that has it’s source of funding and everything intact,” he said.

He is convinced the project will not suffer delays since all the necessary arrangements have been made for its smooth running.

According to him, the contractor has no excuse to delay the project.

“It isn’t that we are now going to source for funding. The funding is sitting in an account in Ghana as I speak. So, the contractor has no reason to delay.”

Football star, Neymar tells court he always signed contracts his manager-father told him to as he appears in Spanish court to deny corruption charges