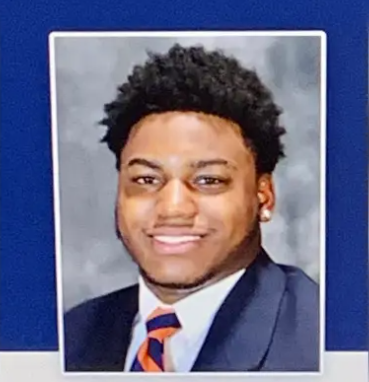 A student who opened fire at the University of Virginia remained on the loose early Monday, Nov. 14.

The gunman killed three people and two others wounded, leading the school community at the college’s Charlottesville campus to shelter in place.

University police said the suspect, identified as Christopher Darnell Jones (pictured above), should be considered “armed and dangerous” and advised students and staff to stay inside.

Shots rang out in the area of Culbreth Road on university grounds, UVA police announced around 10:30 p.m. on Sunday, Nov. 13.

University President Jim Ryan said in a statement Monday morning that Jones is a student at the school.

“Multiple law enforcement agencies are coordinating to find and apprehend him,” he wrote, saying the suspect may be driving a black SUV with Virginia plate number TWX3580.

“As of this writing, I am heartbroken to report that the shooting has resulted in three fatalities; two additional victims were injured and are receiving medical care,” Ryan said in the message.

Officials have not identified the victims or stated whether they were students or staff.

“We are working closely with the families of the victims, and we will share additional details as soon as we are able,” Ryan said.

“This is a message any leader hopes to never to have to send, and I am devastated that the violence has visited the University of Virginia.”

He also announced that classes have been cancelled for Monday.

“I am holding the victims, their families, and all members of the University of Virginia community in my heart today, and we will make plans to come together as a community to grieve as soon as the suspect in apprehended,” he added.

The suspect was described as a black male wearing a burgundy jacket, blue jeans and red shoes, according to the campus cops. 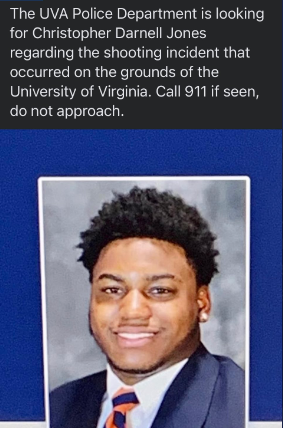