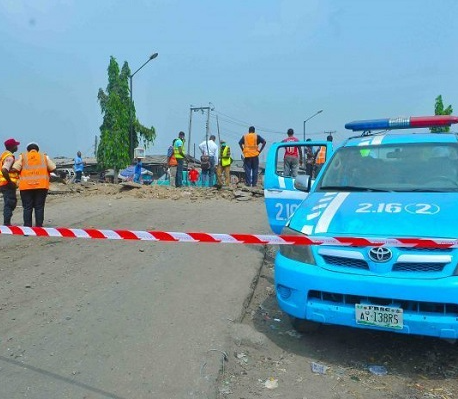 The accident occurred on Monday, Jan. 23, around Alhaji Ede Bus Stop near the General Hospital, Igando at about noon.

Eyewitnesses said they were hit by a driver who was at high speed.

Three others – two ad-hoc health workers and another man – were injured. They were rushed to the General Hospital for treatment.

The exercise, it was learnt, commenced on Saturday, Jan. 21, and will be wrapped up tomorrow, Jan. 25.

An eyewitness told The Nation that the driver veered off the road and hit the persons on the pedestrian lane.

The eyewitness said: “The driver was speeding and he couldn’t properly control the steering when he suddenly found oil on the road.

“As he drove on the oil, it became slippery. In a bid to control the steering, the vehicle veered off the road and hit the people. They all landed inside the gutter.”

Passersby helped bring the victims out of the gutter and they were rushed to the hospital.

Latifat Akanni was said to have died before reaching the hospital. Barakat Usman and a man who sustained head injuries died shortly after.

The mother of Barakat Usman, who arrived at the hospital with her husband, wept uncontrollably, The Nation reports.

It was learnt she had already lost two children, who were elder siblings of the deceased.

She described the loss of her three eldest children as too much to bear. According to her, the late Barakat’s husband had travelled out of the country.

She added that Barakat was a fashion designer with three kids.

“How am I going to take care of her three kids? Oh, Allah! This is too much for me. Barakat must not die,” she wailed, appealing to see the remains of her daughter.